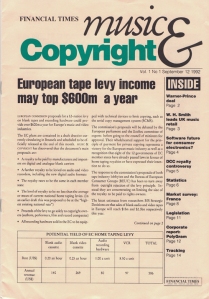 In the past 20 years or so, all sectors of the music industry have been through massive change. Format transitions, company consolidation and greater scrutiny of copyright and licensing have changed the industry beyond all recognition. But have the changes made for industry improvements, and more important, have the main players learned from their mistakes? The recent discovery of the first issues of Music & Copyright has allowed for a unique look at just how much certain things have changed, and how much they haven’t.

The newsletter’s 20-year anniversary came and went in September, but thanks to a long-standing subscriber, copies of the first 24 issues published have been found and make for interesting reading. Despite containing names that have either long since left the music industry or been swallowed up as part of industry consolidation, the headlines for a number of news stories resonate closely with happenings today. For example, the first issue, published Sept. 12, 1992, contains an article describing how Apple Corps sued Sony Music for copyright infringement over the rights to release a Beatles live album. Apple Corps has tightly controlled the sale of Beatles recordings, and only in 2010 were they made available in digital form.

Private copying and the European Commission
The first 12 months of Music & Copyright coincided with the CD becoming the dominant hard format. According to the IFPI, audiocassette album sales stood at 1.48 billion in 1992, with CD album sales at 1.19 billion. In 2003, CD sales had increased to 1.42 billion, with audiocassette sales down, to 1.38 billion.

The issue contained a report on how the UK government had blocked a move by the European Commission to introduce a Europewide private-copying-remuneration system for audiocassettes and audiocassette hardware. Although successive UK governments have avoided legislating on private copying, late last year the UK Intellectual Property Office unveiled changes to the copyright law, with a private-copying exception included for the first time.

The involvement of the Commission in rights-holder interests – typified by the headline “Music industry strategy depends on European Community unity” from issue 002 – is something that most involved in the music industry would rather consign to history. However, attempts to help the industry at the European level haven’t always succeeded. The article in question detailed the ratification of the Maastricht Treaty, which was behind the creation of the European Union (EU) in November 1993. The article describes the proposals put forward by the Commission for Pan-European legislation to develop common trading conditions throughout the EU. The proposals covered issues such as rental, private copying and the duration of copyright protection. However, notable by its absence was any proposal on piracy. Although the rental and duration documents contained some measures to tighten antipiracy initiatives, no separate antipiracy proposal was drafted.

In the past 20 years the Commission has certainly played a part in coordinating antipiracy activities across the region and has put pressure on countries in Eastern Europe that are now EU members to improve copyright protection. But deciding what to do about copyright protection across the EU is an issue that greatly divides countries. France has taken the toughest action with the HADOPI three-strikes system. The UK and Ireland have edged toward sending warning notices, but others, notably Spain, have targeted offending websites rather than individual Internet users. The Commission has always backed enforcing intellectual-property rights but has left the decisions about direct antipiracy activity to national governments.

The dream of copyright harmonization
A key area of the Commission’s reforms that have affected the music industry is copyright harmonization. An article in issue 003 details the Commission’s aim of reforming copyright legislation for the then-European Community’s 12 members. The Berne and Rome Conventions were shaping the Commission’s thinking, but looking back it seems inconceivable that just 20 years ago countries such as Belgium and the Netherlands, which had not yet signed up to the Rome Convention, had no neighboring-rights legislation, meaning performers and record companies in those countries were without copyright protection.

But perhaps the most interesting and eye-opening analysis in the first few issues related to Pan-European licensing agreements. Issue 005 detailed what it described as “the end of a century-old system of national collection-societies and its replacement by a competitive system involving new Pan-European organizations.” The article detailed central-licensing agreements by which the larger record companies paid mechanical royalties for recorded-music sales in all of Europe to one national authors’ society. At the time, BMG and Warner had a central licensing agreement with GEMA, while PolyGram and Sony had an agreement with STEMRA.

However, publishers were highly critical of the agreements and complained that royalties were taking too long to be paid and costs were up because of higher commission charges. The article went on to describe how GEMA, SACEM and STEMRA were jointly planning to create a “European mechanism” to collect mechanical royalties. The announcement of the joint initiative was thought to be a rallying cry for opposition to the newly created European Music Rights Organization (EMRO), which was intended to be a collection-organization alternative to national authors’ societies. EMRO was set up by the UK Music Publishers Association, which at the time owned the Mechanical Copyright Protection Society (MCPS). Although music publishers and rights holders were asked to withdraw their mandates from the collection societies and sign up to EMRO, the major publishers and record companies decided against doing so, and the EMRO strategy was abandoned.

Lessons learned?
Coordinating rights collections across Europe is a subject that has been the focus of Music & Copyright throughout its 20-year history and will continue to be so for the foreseeable future. Despite numerous initiatives, proposals and agreements at all levels, few issues have caused as much dissension among those involved. In 1992 national boundaries were much less of an issue than they are today, but there were, and have continually been, moves to deal with certain rights administration on a regional basis rather than by country.

The advent of digital distribution opened a can of worms across Europe that exacerbated the problem, and solutions have been slow in coming. Digital-music services have long complained about cumbersome licensing negotiations, and the withdrawal by the major publishers and some independents of certain repertoire from national authors’ societies and the subsequent establishment of licensing hubs have not satisfied all.

Many more issues, of course, have a happier history of repetition. For example, 20 years ago Music & Copyright profiled Sweden. The relatively new CD format experienced retail unit sales growth of 47% in 1991, overtaking the vinyl LP to become the biggest album format. Earlier this year Swedish trade association Grammofonleverantorernas Forening published trade figures that showed streaming is now the biggest source of recorded-music trade revenues. The same issue also contained a seemingly prophetic headline, which asked whether electronic delivery would be “music’s digital future.” However, there was one article that most in the music industry can only dream of repeating: “China extends copyright protection as sales boom.”

2 thoughts on “A short history of the music industry: different formats, familiar names but the same old problems”